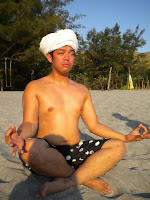 Hindi ko po kayo binoto, hindi ko rin masabi kung bakit hindi, pero my friends had a field day when they found out because I practically campaigned for you, defended you from all their valid criticisms on your qualifications and your person. But in not fulfilling that great act of support for you on election day, was I subconsciously washing my hands from all these political guffaws your presidency have now been committing? I’m not really sure, but I am certain that I would still have voted for you, and I would not have regretted it as much as I do not regret going to Anawangin that day to contemplate our country’s future.

If there’s a bad word my Mommy Monster taught us not to use, it is “Buwisit!” Maybe it runs along the line of her Ilocana philosophy of not saying “Wala akong pera” as the mere utterance of such sentences creates a mindset that ultimately becomes self-fulfilling prophecy so kahit the past few weeks ay nako-conclude ko nang “Minalas lang talaga ang Pilipinas sa kanyang mga lider,” ayoko na lang sabihin, but think about it, around the time that Lee Kuan Yew was buiding Singapore into a First World Nation that it is now, Marcos was pillaging us back to the Stone Age. I agree with you nang sinabi mong sinayang ni Gloria ang kanyang halos isang dekadang panunungkulan na sana’y sapat na to put us right back on track towards sustainable development and social justice. Instead, somewhere in the early years pa lang, she must have found that too daunting a task over just taking advantage of her position to increase her family’s and cronies’ net worth at a rate that only China’s economy could rival. Ngayon, pasensya na, pero the people do not seem to expect much anymore from you. Don’t take it personally, we have been conditioned to distrust the government, regardless of who you are and what you really do. It’s gonna take consistent, sincere, and vigorous efforts to win us back. The good news is we are desperately willing to believe any government who promises to clean up its act, and regain the Philippines’ position as a regional political and economic leader. Kaya nga kahit kung tutuusin mas may credentials sina Gibo, Gordon, at Villar, ikaw ang binoto ng majority. It is a desperation comparable to that of the poorest of the poor’s when they almost brought Erap back to Malacañang last May.

Corruption has become so ingrained in the workings of government that it has seeped into our daily lives. Our silence and even participation, sometimes misconstrued as acceptance, IS ACTUALLY US ADAPTING lest we perish in a virtually failed state whose national development index has continually spiraled to one of the world’s lowest.

Mr. President, the Filipinos, all 90+ million of us (and still growing) are no longer citizens of a nation, we are nomads who surprisingly survive in this harsh land. Few flourish but far more must join the state-sponsored diaspora to actualized lands. Nomads, understandably, are undisciplined, uncooperative, disunited and argumentative. It must be a pain in the ass to lead such vocal and cynical peoples but surely you do not have to look hard to see that you have at your disposal a team of champions. Magagaling kami, matatalino, matatatag ang loob. Maayos na gobyerno na lang talaga ang nawawalang crucial ingredient para maging bongga ang bansa natin! There seems to be no substitute to good governance because although so many in the private sector can only do so much to compensate for a government that sucks! Still, despite their shortcomings, our schools, Churches, industries, media, NGO’s, cooperatives, foundations are big reasons why the Philippines has not completely disintegrated despite a grossly corrupt and unpatriotic government. At every level of our polarized society you will meet inspiring individuals and groups consciously doing their whatever they can to make the Philippines a better place. We do so with nary a government support because mahirap nang umasa sa gobyerno, or worse, baka gumulo lang kapag in-involve pa ang gobyerno. If only you can transform government, from panira to one that will literally get our acts together then perhaps all these good intentions and deeds can be better orchestrated towards our finally becoming a Champion Nation…

Your belief in the importance of a clean, transparent, and accountable government is a good start. Despite a dismal first 100 days I think you still have enough public support to do what you have to do, but accept that even your supporters like me will always be critical because your missteps will be as much ours.

Thank you for your time, Mr. President. Kindly reply na lang in the form of a term that will be forever remembered as one that paved the way for a First World Philippines. Your success will be as much ours. We desperately hope for it.

With you in nationhood,